A New Jersey man in need of a kidney transplant has found a donor in an incredible way – through a unique T-shirt and thousands of shares on social media. This summer, during a trip to Disney World, Robert Leibowitz wore a T-shirt that read: “In need of a kidney. O positive. Call 917-597-2651.” A woman, Rocio Sandoval, snapped a photo of the shirt and posted it on Facebook. 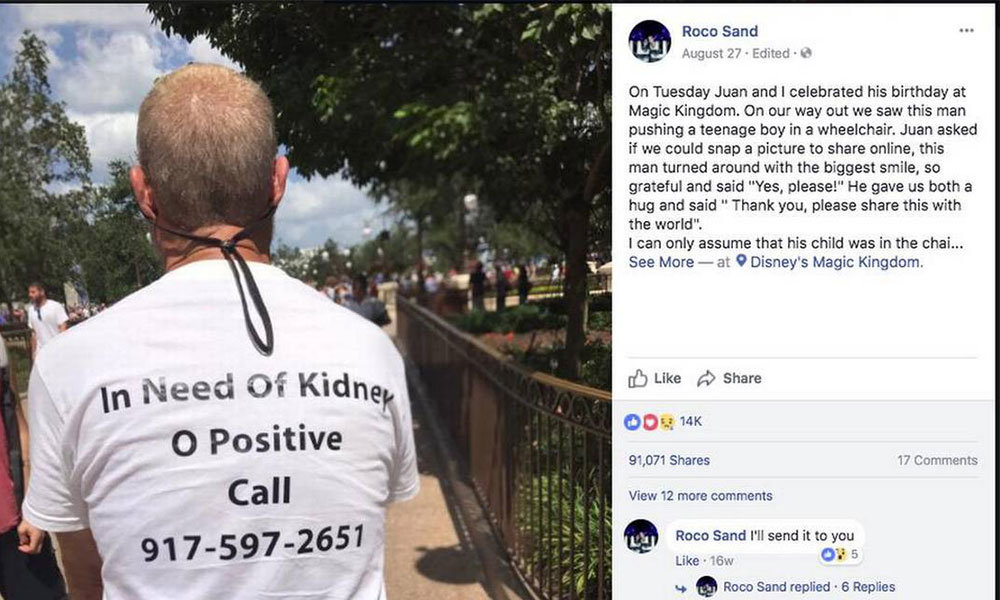 The image was shared more than 90,000 times and several people came forward offering to donate their kidneys, including Richie Sully. After testing, doctors said last week that Sully, an Indiana man, is a perfect donor match for Leibowitz. On January 18, doctors will perform the kidney transplant in New York.

“I think that I am still in shock, just the fact that it is real,” Leibowitz told Orlando’s WFTV. Until Sully came along, Leibowitz, the father of five children, hadn’t been able to find a donor match despite years of trying.

“As a father, I could relate to having kids, and the last thing I would want my kids to worry about every night when they go to bed is how much more time they have with me,” Sully said.

Leibowitz’s son Max posted a thank-you note on his Facebook page. “Thank you Rocio for the amazing post. Without you this would’ve never been possible. You played a big part in saving someone’s life and keeping a family together and I can never ever thank you enough for this. Thank you so much Richie, for being the amazing person you are to donate a kidney to a person you don’t even know, just out of the kindness of your heart. I love you guys and thank you so much for letting me keep my father.”

Following the procedure, Leibowitz, Sandoval and Sully are reportedly planning to take a trip to Disney World together. “I just wanted to do something nice for somebody,” Sandoval said in a TV interview. “I was hoping it would get shared 100 times in one day, because I only have like, 260 friends on Facebook. I am over the moon. This is like my Christmas miracle.”