Printing in the movies

Whenever I watch a movie or TV show that includes scenes of a topic, like printing, that I think I know something about, I’m often amazed at how it’s portrayed and somewhat distorted through the director’s vision. It’s likely that people who aren’t familiar with the profession accept what is presented in film as reality – while all I can see are the mistakes. Nonetheless it is illuminating to see how printing has been portrayed by Hollywood in film.

Please press the play arrow to view theses printing movies. Note that they may stop for a moment while the video buffers in the background or you may need to “wiggle” the play head to get them going.

In the 1939 movie “Mr. Smith Goes to Washington” Jimmy Stewart’s character, a Boy Scout leader, prints a newspaper in his house. When party bosses try to railroad him, the boy scouts go into action and print a paper in his defense. It’s terrific how realistic scenes of them at work are intercut with scenes of a big city newspaper publisher doing the same tasks.


The 1941 movie “Penny Serenade” has Cary Grant buying a country paper in California and summoning an old pal from New York to help him. The Linotype is stuck, however, the old hand thumps the middle of the magazine, getting the Linotype to work again – just the thing many folks think is the only thing press operators are capable of.
My favorite though is this scene from 1985’s “To Live and Die in L.A.” Willem Dafoe is a bad-boy money counterfeiter and does everything from initial image capture to final cut and trimming of his presswork. This is the type of work that I did (apart from the counterfeiting) at a small printer in Montréal during my summer jobs in the 1960s. When he huffs his breath across the plate to reveal the image…well I can’t help imagining that this was the inspiration for processless CtP imaging. 🙂 I’m sure there are many more examples from film and TV…however, just to get you started at your local video shop:

Well “dog my cat” one of my favorite historical characters, Jim Bowie, is accused of murdering the editor of the local New Orleans Newspaper (circa 1830). Note the pressman’s newspaper hat. More info on that HERE. 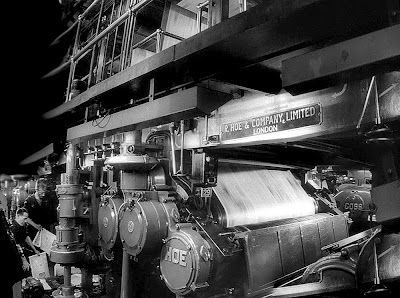 The lead actor works at the Daily Express in London England. Great scenes of the “HOE” newspaper press, the workings of newspaper journalists, as well as the end of the world. “If it’s a Hoe, it’s the best.” – the proud motto of R. Hoe & Co., Inc., maker of presses since 1803.

Newsies (1992) Newsboys in 1890s New York print a broadsheet. Typesetting and printing appear very credible except that they manage to print 100,000 by hand overnight.

Snow Falling on Cedars (1999) A scene shows a working Linotype and what may be a Wharfdale or similar hand fed press printing a newspaper in the Northwest during WWII.

Quills (2000) About the Marquis de Sade’s life in the Charenton insane asylum. After his death the director puts the lunatics to work printing his works. Wonderfully detailed printshop with sewing frames, typesetting, and printing with a Stanhope press. “The compulsives set type and the manic depressives ink,” the director explains.

Catch Me If You Can (2002) Tom Hanks plays an FBI agent pursuing a forger. He takes a forged check to a printshop where the wise printer tells him it was printed on a Heidelberg and such work is only done in Germany, England and France. Hanks then goes to France and finds the forger. Hmmmm.

Miss Potter (2006) Romanticised story of children’s author Beatrix Potter & her romance with her publisher. As is well-known she was quite persnickety about the appearance of the color in her books. A pressroom is shown in action (perhaps the printing museum at Innerleithen in Scotland).

The Counterfeiters (Die Falscher) 2007 It fictionalizes “Operation Bernhard,” a secret plan by the Nazis during the Second World War to destabilize Great Britain by flooding its economy with forged Bank of England bank notes. The film centres on a Jewish counterfeiter, Salomon ‘Sally’ Sorowitsch, who is coerced into assisting the Nazi operation at the Sachsenhausen concentration camp.

Seven Pounds (2008) Rosario Dawson plays a woman who prints stationery on a Heidelberg windmill in her garage.


The Green Hornet (2011) Which has great shots of what appears to be the Los Angeles Times press facilities.